The advantage of having full time Asbestos Air Monitoring 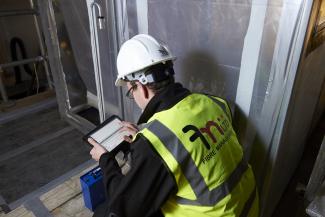 Now seemed an opportune time to discuss this topic as we have just had a perfect example happen on one of our sites!

While removing asbestos residues from the wall of an old plant room a small amount of dust fell out of an opening where pipes ran through the wall into an adjacent room. This unforeseen occurrence obviously caused alarm for the building users, but as we had a full time analyst on the job and we were acting in a management role for the client we could act quickly and decisively to reassure them that an exposure had not occurred.

The actions taken included instructing the operatives in the enclosure to immediately suspend work while the integrity of the enclosure was checked, which in this case it was found to still be intact, and restricting access to the location while an air test was run.

The area was cleaned by the Licenced Asbestos Removal Contractor (LARC) as a precaution and the air test counted to confirm the airborne levels of respirable fibre were below the limit of quantification (0.01 f/cm3).

The imperial evidence of an air test was the best reassurance that could have been given to the building management team to allay the fear of the building users. In this case it was found that the debris was in fact loose plaster dislodged then a pipe was disturbed and no breach had occurred but the actions would have been the same regardless.

Having an analyst on site for the duration of the works also gives you analyst the best chance for undertaking a thorough Four Stage Clearance as they are aware of the progression of the enclosure and form a good working relationship with the LARCs.